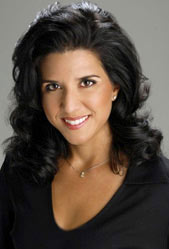 Dr. Cynthia Gabaldon was born in Puerto Rico, where she lived until she was 10. She was raised in Casselberry, Fl and graduated from Bishop Moore Catholic High School. At the age of 19, she began working at the front desk in a Chiropractic office. It was not long before she realized this was what she wanted to do with her life. In 2003 she graduated from Life University and was the sole recipient of the Clinical Excellence Award (the highest clinical award).

In 2007, her daughter was born and would change the course of her career. While she was laboring at home, it was discovered that her daughter was in a bad position for labor (she was acynclitic- her head was not positioned well in her pelvis and couldn’t mold to pass through the birth canal). She remembered learning the Webster technique in school, which has been shown to reduce the effects of intrauterine constraint, allowing the baby to get into the best possible position for birth. There were no chiropractors at that time in all of Central Florida who focused on prenatal patients, so she was unable to have a chiropractor come to her home during her labor to perform the Webster Technique. As a result she transferred to the hospital and had to have a Caesarean section. She believed that if she had been adjusted during labor, her pelvis would have been aligned and her daughter’s head would have the necessary contact points with the pelvis to mold- making a vaginal home birth possible. It was that experience that motivated her to change the focus of her practice to help other pregnant women in such a predicament. That same year (2007) she matriculated in the International Chiropractic Pediatric Association’s post doctoral prenatal and pediatric program at her alma mater.

Dr. Gabaldon was the first chiropractor in Central Florida whose practice focus is prenatal and pediatric patients. She has been in practice since 2004 and began working with birth professionals in the area assisting with pregnancy related issues including adjusting during birth in 2007.

Font Resize
Contrast
Accessibility by WAH
Call Us Text Us